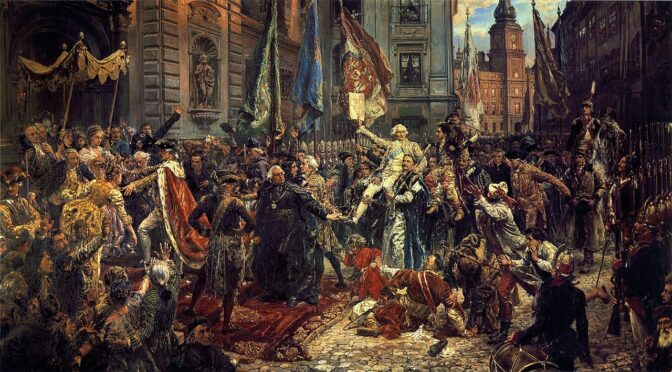 A time of vulnerability, a time of hope

In the final decades of the 18th century Poland was still one of the larger states of the Old Continent, encompassing an area of over half a million square kilometres. No one with any political knowledge could have doubted, however, that – to paraphrase Shakespeare – something was rotten in the state of Poland. The country, which had enjoyed its golden age just two centuries prior, was struggling to recover from the numerous wars in which it had participated. Its treasury was bare. Its army was far inferior to those of its neighbours: Russia, Prussia and Austria. The bourgeoisie was weak, much of the nobility impoverished, and the serfs felt no connection with the state. The king reigned, but his power had long since been diminished. Pulling the strings were a few influential magnates – the oligarchs of their day, many of whom were lukewarm or even hostile to the idea of reform. To secure their particular interests, some of them were even prepared to solicit the help of neighbouring states, which themselves were only too eager to take advantage of Poland’s malaise. They began to ruthlessly interfere in Poland’s internal affairs, and in 1772 divided up part of its territory among themselves. The truncated Republic of Poland found itself in a state of increasing dependence on Russia.

And yet not everything was going in the wrong direction. As early as the 1860s, King Stanisław August Poniatowski had introduced a number of ambitious reforms, which looked to improve education, bolster the position of the cities, and strengthen monetary policy. In 1788 the process of change accelerated after the convocation of a new Sejm, later called the Four-Year Sejm or the Great Sejm. The deputies renounced the Russian protectorate, introduced income tax, and decided to expand the army. The reforms culminated in the adoption of the Constitution of 3rd of May, which was officially enacted under the name of the Government Act.

“In the name of God, one in the Holy Trinity!” these are the first words of the preamble to this historic charter. The Constitution recognised Roman Catholicism as the prevailing religion, but at the same time – in keeping with Poland’s centuries-long tradition of religious tolerance – it explicitly referred to the freedom of “all rites and religions”.

In the brief text of the Government Act of 3 May 1791, the words “freedom” and “free” are conjugated in all cases and are used as many as 25 times. They include references to “personal freedom” and “civil freedom”, as well as to the “free nation” of Poland, with the “the authority to make laws for itself”, free of the “ignominious dictates of foreign coercion,”. The nobility is free, the towns are free and the peasants are taken “under the protection of the law and the national government”, which was the first step towards abolishing their serfdom. “Complete freedom”, meanwhile, was guaranteed to all newcomers and those returning to Poland. Freedom – a vital part of Polish DNA for centuries – is omnipresent in the wording of the Constitution of 3 May.

The same spirit of freedom accompanied European settlers in America when, only a few years earlier, they had successfully challenged British rule and achieved their independence. The US Constitution is four years older than its Polish counterpart, while its famous amendments guaranteeing certain freedoms – known as the Bill of Rights – only came into force in December 1791.

Declarations of freedom were also issued during the French Revolution at that time. However, the lofty ideals espoused on the banks of the Seine were mixed with a reign of terror, as was noted by the British newspaper The Times, which, in an article of 9 May 1791, described the French as “despotic democrats”. The Times contrasted their bloody revolution with the Polish revolution, which was rational, liberal and cruelty-free. The distinguished philosopher, Edmund Burke, spoke of the 3 May Constitution with comparable enthusiasm: ” Not one man incurred loss, or suffered degradation. All, from the king to the day-labourer, were improved in their condition.”

The Government Act was by all accounts an utterly modern legislative instrument. It put emphasis on Montesquieu’s tripartite division of power, made deputies representatives of the whole nation, and did away with the anarchic principle of the liberum veto in favour of majority decisions. There was genuine hope that the Republic could still be saved from collapse and led back to the path of greatness.

A choice restated with each passing day

Sadly, these high hopes were quickly dashed. A year after the enactment of the Constitution of 3 May, a Russian army of almost 100,000 men marched into Poland. In 1793 Russia and Prussia once again tore off large chunks of the Republic’s territory. The Sejm, sitting at the behest of St Petersburg, revoked the constitution. The last attempt to save the country was the uprising of 1794. Sadly, the Polish army commanded by Tadeusz Kościuszko, a legendary hero of the American struggle for independence, was unable to withstand the overwhelming force of the enemy. After they captured Praga on the right-bank part of Warsaw, Russian soldiers engaged in a bloody slaughter of the civilian population. The dramatic scenes, immortalised not only in the accounts of witnesses but also captured on canvas by visual artists, have become indelibly associated among Poles with the mass crimes committed by the Russian Federation in Ukraine in such places as Borodianka, Bucha, Mariupol and many other places.

Although Poland vanished from the map of Europe in 1795, the memory of the Constitution of 3 May persisted. During its many years under foreign occupation – the Partitions of the 19th century, World War II and decades of Communist rule – any formal anniversary celebration of this charter was out of the question. However, as soon as the country regained its sovereignty, the 3rd of May became a national holiday. Such was the case firstly in 1919, when independence was restored after the Great War, and secondly in 1990, following the collapse of the Communist system.

Last year, when Poland celebrated the 230th anniversary of the adoption of Europe’s first constitution, the presidents of several countries in the region were invited as guests to the Royal Castle in Warsaw. Among them was the President of Ukraine, Volodymyr Zelensky, who signed a declaration of the Heads of State in attendance. “We wish – declared the signatories – “for Europe to be built on the pillars of fundamental values and principles”, such as “freedom, sovereignty, territorial integrity, democracy, the rule of law, equality and solidarity”.

Freedom and sovereignty are not set in stone – we have to be ready to fight for them each and every day. The short life of the Constitution of the 3rd of May painfully proved this fact. It is also true today, when Ukraine is standing up to defend itself against the Russian invasion.